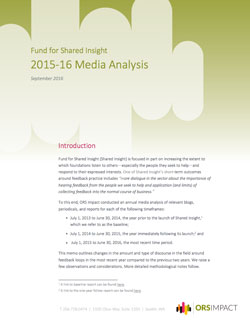 ORS Impact conducted a second follow-up media analysis to see if there were any changes in the level of discourse on feedback loops and openness two years after Shared Insight’s launch. They reviewed relevant blogs, periodicals, and reports to assess changes over the timeframe from July 2015 to June 2016 compared to the previous two years.

*We attribute this decrease in “chatter” around beneficiary feedback loops to our decision to refrain from writing about and encouraging media coverage of our newly launched Listen for Good initiative as it was highly experimental and unproven during most of 2016.