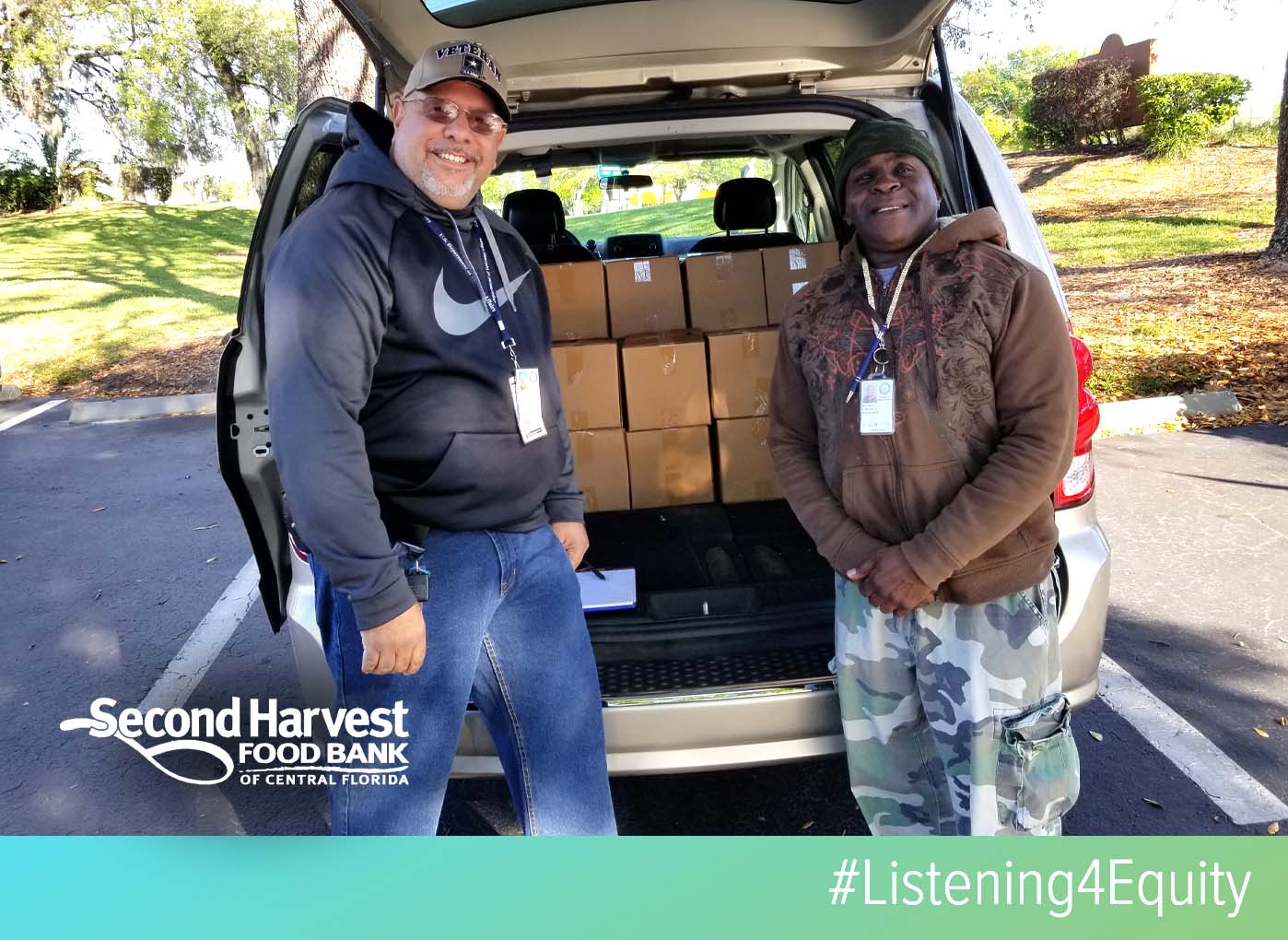 When Agustin “Augie” Serrano makes deliveries for Second Harvest Food Bank of Central Florida, he especially connects with the veterans, many of whom are experiencing homelessness. As a veteran himself, Augie is seen as a trusted peer who shows up every week to help out. So when Second Harvest started participating in Listen4Good, a feedback initiative to gauge what participants think about its food-distribution program, it naturally turned to Serrano as a trusted partner of its own.

“We knew we should start with Augie from the beginning, with the survey design,” says Denise Hogan, Second Harvest Food Bank’s Bites, Camera, Action! Program Manager and Community Liaison. “He was empowered, we were empowered, the veterans in our community were empowered because we were all creating the space to ask and share together.”

Through three rounds of Listen4Good surveys in the last couple years, Second Harvest has relied on community partners to make sure it is asking the right questions in the right way and working with the right people to get the most helpful responses. The food bank has worked with a public school system, a local neighborhood improvement group, and with Serrano and his colleagues at an Orlando branch of an organization that provides services and assistance to veterans.

The survey work and the success of the partnerships have informed one of Second Harvest’s four new strategic priorities for over the next ten years: “Neighbor Voice.” The goal of the priority, according to the organization’s strategic plan, is to develop a “community practice that is driven by the neighbor’s voice and serves people of diverse needs and life experiences.”

A key aspect of that work, says Lauren Moskowitz, Director of Community Impact, is to “foster a culture of continuous learning, engagement and empowerment within our network of community partners.”

Serrano, who served in the U.S. Army for nearly 20 years, helped customize the Listen4Good surveys. In a question asking about challenges people face in addition to food insecurity, Serrano came up with a list of choices that were particularly relevant to the veterans he works with. He knew, for example, that because of privacy concerns and some associated stigma, veterans were unlikely to self-identify as having “mental-health issues,” so the entry was deleted in favor of the more general “health issues.”

Second Harvest says the response rate to the surveys among veterans has been unusually high and the food bank has taken action around the honest answers they’ve received. The food boxes it supplies now include more variety, diabetic-friendly choices, and the milk and cereal most requested.

“It may not seem like a big deal, but the guys are so happy to get milk every time, cereal, and breakfast bars,” Serrano says. “I don’t think a lot of them would have even answered a survey if they didn’t get it from me or other peers or their social workers. It’s about trust and [Second Harvest] recognized that in a way that has benefitted everyone.”