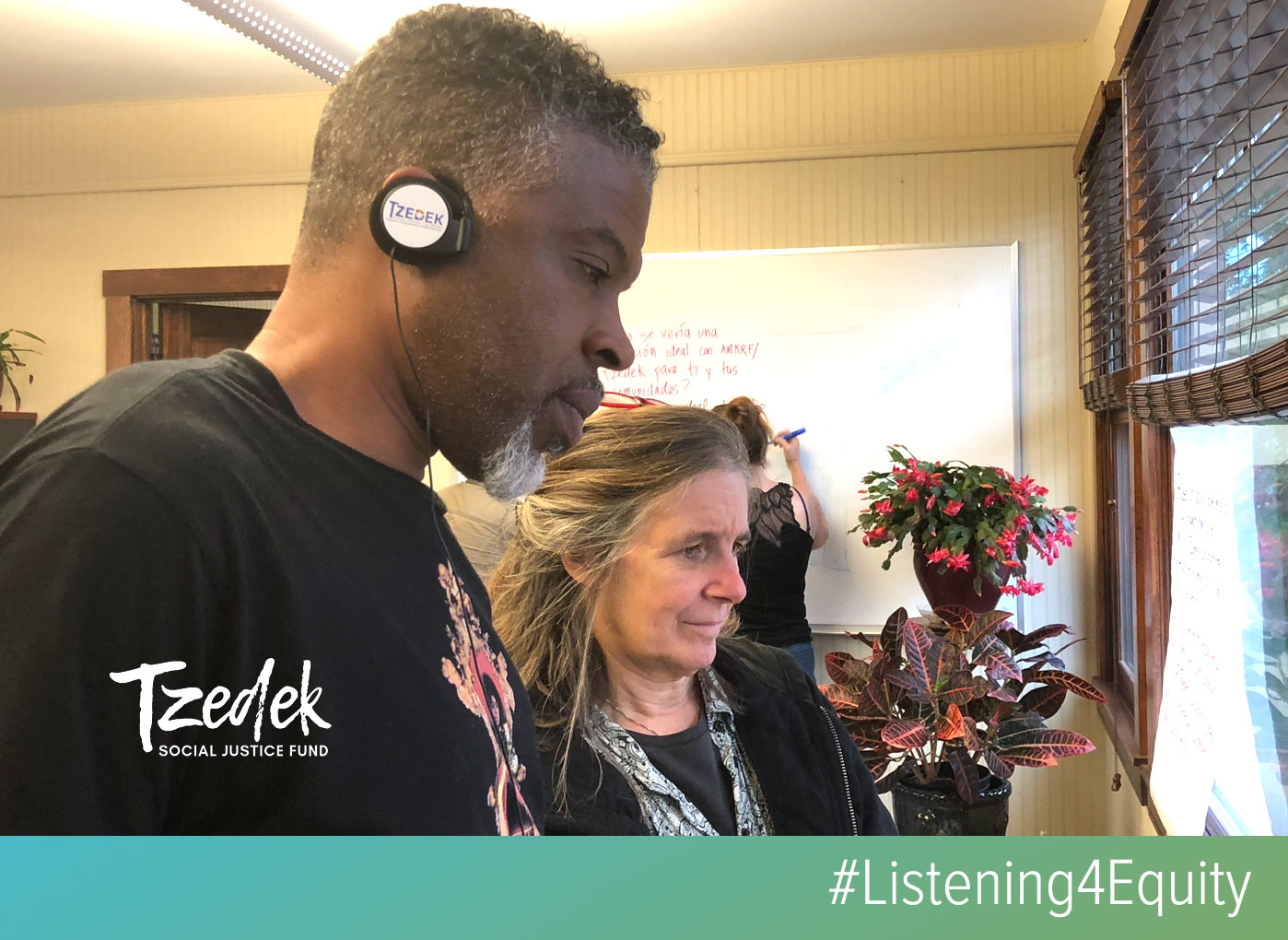 The Tzedek Social Justice Fund convened a series of meetings of people identified as trusted advisers as part of a community research process that Tzedek’s executive director Marsha Davis says led to a “paradigm shift in how we fund, whom we fund, and who decides.”

Three years ago, the Amy Mandel and Katina Rodis Fund, a grantmaker in Asheville, NC, set a course for changes that staff and the founder knew would be imperfect and messy. They also felt it was necessary.

The fund was already focused on issues of justice —LGBTQ justice, racial justice, and the ongoing need to combat antisemitism — but it wanted to more fully and intentionally embrace philanthropy dedicated to social justice and led by people directly impacted by systems of oppression and injustice. What has emerged so far is a grantmaker with a new name, the Tzedek Social Justice Fund, a new governing board, and a revamped way of doing business.

“As our paradigm shifted to moving the needle on systemic inequity, what had to come along with that is a paradigm shift in how we fund, whom we fund, and who decides,” says Marsha Davis, Tzedek’s Executive Director and Director of Organizational Strategy and Practice.

The journey began with what the organization calls its “pause for the cause,” a timeout from grantmaking in 2019 for individual and fund-wide reflection about power, white supremacy, oppression, and liberation; dialogue internally and with trusted advisers, movement leaders, grantee partners, and city residents; and a community-based research project meant to reflect the wide-ranging lived experiences that comprise Asheville.

One major resulting step was for founder and donor Amy Mandel, who describes herself as a white woman born into wealth, to step off the board to make way for a new board of eight community leaders, seven of whom are people of color.

Tzedek also introduced three new grantmaking programs rooted in trust-based philanthropy, the practice of funders working to alleviate power imbalances by building trusting relationships with grantees. The fund streamlined its applications and reporting requirements, expanded the role of a grantee advocate to provide technical assistance, committed to providing multi-year, unrestricted grants as the norm, and regularly solicited feedback from community members and incorporated it into decision-making. It set aside $250,000 to test out a new participatory grantmaking program, called Community-led Grantmaking, focused on collective liberation and to be designed and implemented by five community leaders selected as Tzedek fellows.

Since the changes, 93 percent of Tzedek’s grants have gone to nonprofits led by people impacted by systemic racism — including around immigration status — and doing work centered around justice issues. Many of the newest grantees are groups that weren’t even on the funder’s radar in the past.

“The Asheville Buncombe Community Land Trust is a name that came up over and over from the grassroots organizers we were talking to,” says Davis, offering an example. “They are highly trusted in the community and doing really valuable work [in affordable housing and equitable urban renewal], but we wouldn’t have known about them the way things were structured here before.”

Tzedek is learning about different takes on issues, too. Just before the new board members joined in early 2021, the fund was making plans for what it was calling grants for community healing. Nonprofits would use the money, Tzedek thought at the time, for staff retreats or sabbaticals for leaders who had been wrestling with the challenges brought on by the pandemic and the heightened racial tensions. But the new board members offered another, and, to them, more pressing definition of healing.

“They identified old rifts in the activist communities and said that different groups could work in concert around justice issues if they first had the support and skills to address their differences,” Davis explains. “Because of our privilege in the philanthropic sector, we were thinking about burnout; but the people doing the work were thinking about conflict resolution.”

Tzedek’s community-healing grants are now geared toward mediation and coalition-building among the justice movements.

Tzedek’s new Impact Awards and Brilliance Awards, no-strings-attached cash grants to individuals working in their communities, give the funder another meaningful and instructive look at how their money can best be spent.

Philip Cooper, an Asheville resident who works in economic and workforce development and advocates around issues impacting people returning home from prison, as he himself did, used his $3,000 Impact Award in ways Tzedek “could never have imagined,” Davis says. Among other spending, he gave small amounts of money to a handful of his colleagues who were having trouble affording the fees to get certified as mental-health or addiction specialists. This, Cooper says, spurred him to start the Clinicians of Color Movement, which snowballed into a much bigger project with new private and public backing addressing re-entry programs, community health in rural areas, and diversity in North Carolina’s mental-health workforce.

Says Davis about the awardee, who goes by the name Change Agent Cooper: “He is such a great example of the ripple effects that come with trusting that those who are closest to and most impacted by systemic injustice are those who will have the real world, practical solutions to those problems and have the energy and connections needed to push the work forward.”